Please tell us about yourself and your most recent project.

I’m a full-time writer, publishing under a half a dozen names in fiction and non-fiction. My plays are produced in New York, Massachusetts, London, Edinburgh, and Australia. I provide business writing and editing services for an international client base, and I teach both online and in-person all over the world.

paired up hex breaker Jain Lazarus with cynical detective Wyatt East on the set of an independent film with some preternatural problems. In OLD-FASHIONED DETECTIVE WORK, Jain disappears after a romantic weekend with Wyatt, and he’s the prime suspect in her disappearance. He decides to use old-fashioned detective work to track her down, although he winds up dealing with shape shifters, teens with paranormal abilities, and a cantankerous mermaid. He and Jain also start revealing their pasts to each other and having to face the consequences — many of which ratchet up in book 4, LOVE AND FURY. Book 3, on which I’m currently working, CRAVE THE HUNT, is mostly from Billy Root’s point of view. He became a fan favorite after HEX BREAKER released, and there was more to his story after HEX BREAKER.

I’m also in the process of releasing a series of non-fiction Topic Workbooks, based on classes and seminars I teach (since I have to cut back my teaching schedule). They cover areas like SETTING UP YOUR SUBMISSION SYSTEM, THE SERIES BIBLE: CREATION AND MAINTENANCE, CREATIVE STIMULUS, and the like. They’re up on Smashwords.

Now for Devon’s answers to our ‘weird questions.’

1. What CD is in your CD player right now?
“Beautiful Wasteland” by Capercaillie.

2. What is the meaning of life?
Be kind, but don’t stand by and allow cruelty by others.

3. What do you want written on your tombstone?
I plan to be cremated and scattered in the ocean; but I hope people remember me as committed to positive change, and I hope they throw a big party in my honor and tell funny stories.

4. What time do you normally get to be on a working day?
When that day’s work is done. Writing is not a 9-5 job. When you have a deadline, you honor it, not matter what else is going to hell in a hand basket in your life. There’s no such thing as “no time to write.”

5. If you could be born into history as any famous person, who would it be and why?
Shakespeare. I’d love to live that level of brilliance from inside.

Blurb for Old Fashioned Detective Work:
Detective Wyatt East finds himself the primary suspect when hex breaker Jain Lazarus disappears after their romantic weekend in Vermont. In spite of the suspicions, Jain’s boss, Maitland Stiles, hires Wyatt to track her down, forcing him to face aspects of his own painful past and revealing more about hers. Saddled with two rebellious runaway paranormal teens, he’s embroiled in a shapeshifter pack disagreement, and must learn to work with both a caustic dragon and a cantankerous mermaid to not only find Jain, but help her help an old friend who’s in over his head. Wyatt learns he is not without psychic abilities of his own, although he prefers old-fashioned detective work.

I’ve known Maris since before I started writing professionally.  You might say she was an inspiration and helped get me going.  I know she told me about RWA (Romance Writers of America), although she might not remember.  When we met I was a ‘fan’ and I’m delighted that we’ve become friends.  She gives some clever answers to my ‘weird’ questions.  Please leave a comment and let us know what you think on those topics.  Now I’ll turn things over to Maris.

Please tell us a little bit about yourself: I’m a California gal who was talked into moving to Michigan for “Just two years,” he said. That was 42 years ago. And yes, we’re still married. In fact we have two grown children and two granddaughters…and a Rhodesian Ridgeback who’s as big as a person. After having 25 romances published, I switched to writing mysteries (right after my husband retired. Anyone who lives with a man who is always around will understand why murder appeals to me). We now head for Florida in the winter, and as the temperature drops that’s sounding more and more appealing.

My two mysteries—THE CROWS and AS THE CROW FLIES—take place in southwestern Michigan, and, of course, include a Rhodesian Ridgeback and have a romance subplot. Both are available on-line, and I’m working on a third in the series.

1. Have you ever had an imaginary friend? Definitely. I think I started making up stories in my head where Joey was my friend when I was around 6. He was my buddy into my early teens. Did I know he was make believe? Sure, but once I closed my eyes, he was real.

2. Are you a “dogperson” or a “catperson”? I like both and have had both cats and dogs most of my life. I love Siamese cats and have owned a half dozen over the years. They have so much personality. As for dogs, I prefer the larger breeds, and maybe I love the Rhodesian Ridgeback because, in a way, they remind me of cats. Aloof is one word used to describe the breed standard. 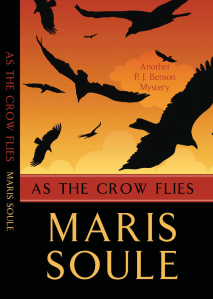 3. What’s the model of your mobile phone? I have the 4S iPhone. Now does that mean I know how to use all the bells and whistles on that phone? No way, but it certainly makes life easier and I’d be lost without it.

4. What time do you normally go to bed on a working day? I’ve always been a night owl, even when I had to get up early in the morning. When my children were young and I was under contract for a romance, I’d often stay up until 2 a.m. writing and then be up at 6:30 a.m. to get them off to school. And no, I don’t usually take naps.

5. Who is the person you trust most? My husband. He’s my best friend. (And even though I have all of these books on poisons and weapons, I believe he trusts me. At least he still lets me cook dinner.)